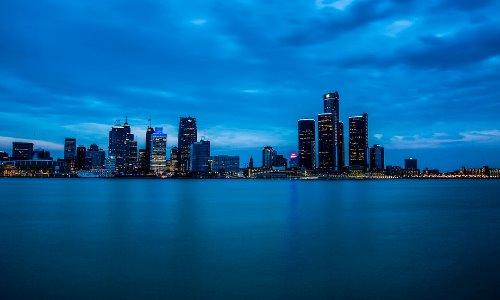 Founded by the French explorer Antoine Laumet de la Mothe, suit de Cadillac the city of Detroit today is recognized as the largest city on the United States-Canada border and most densely populated country within the United States of America.

Primarily a cultural and business transportation and financial center, the metropolitan area of the city of detroit has a current population if over 5.9 million people. The city of Detroit today is viewed as a central port along the Detroit river connecting the great Lakes to a system of canals, channels and locks known as the Saint Lawrence Seaway.

The video link below shows two lanes of traffic along the Interstate 275 in Detroit Michigan heading in opposite directions. Motorists observed closest to the live traffic webcam are traveling in a southernly direction whilst motorists further away are observed as traveling north

The link below shows traffic flowing along Eureka Road off the Interstate 275 Michigan (I-275) which functions as a western bypass to the Detroit metropolitan area.

The Dossin Great Lakes Museum provides an extraordinary service to the naval population via the Detroit River Webcam allowing viewers a live broadcast of sailboats, motorboats and ocean freighters sailing along the river.