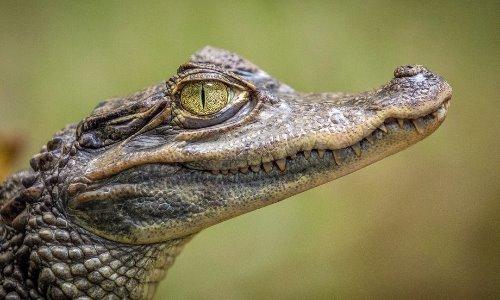 The name alligator is thought to have been derived from the Spanish term en lagarto which means “the lizard” which may have been used by the Spanish explorers and settlers when they arrived in Florida to describe the reptile. Subsequent spellings of the name used in the English language include alagarto and allagarta.

The crocodile often referred as the true crocodile is a large aquatic reptile native to the tropical regions of Africa, Asia, Australia and the Americas. The order Crocodylinae of which all its members are considered as real crocodiles, is categorized as a biological subfamily of the order. The word crocodile is often used loosely to describe all living members of the Crocodilia order which also includes members of the Alligatoridae family; alligators as well as all other extant and fossil groups.

Nonetheless although both the alligator and the crocodile may appear similar to the untrained eye, they both belong to two separate biological families.

Facts about the Alligator and Crocodile

Located along the South Orange Blossom Path in Orlando, Florida, this 110 – acre wildlife reservation and theme park known as Gatorland is widely acknowledged today as the “Alligator Capital of the World”. Known for consisting of a large number of crocodiles and alligators, the theme park features thousands of crocodiles and alligators, a breeding marsh, an observation tower and a boardwalk. The wildlife reserve is additionally known for its aviary, swamp walk, petting zoo, reptile shows as well as a number of educational programs.

Visitors to the Gatorland website can watch alligators live via a live streaming controllable webcam located at the popular Orlando theme park. This alligator webcam can accessed by clicking n the link posted below and is provided by the Gatorland Live Streaming Controllable Alligator Webcam Florida.

Recently the Everglades National Park launched a new webcam overlooking one of the more touristed visitor areas situated at the park. Located at the Royal Palm Visitor Center, this webcam offers viewers a peak into the park wildlife activity from three various vantage points. Visitors by clicking on the link posted below may catch a glimpse of some resident birds and alligators at the park and even the occasional on-duty ranger.

This is an excellent alligator webcam located at Gatorland in Orlando, Florida. It has streaming video and can be remotely controlled so you can pan, tilt and zoom. See gators in the marsh, tons of birds and people visiting the park, too! Best time to watch is from 7 a.m. to 6 p.m. Eastern Time.

Watch this alligator webcam in sunny Rotonda West, Florida. Webcam updates every 30 seconds and includes time lapse video of the previous day. They also have live streaming video, too.

This alligator cam is located at the Naples Zoo in Florida. Watch American alligators relaxing in the sun or swimming around in the central pond.

This webcam, when online gives a live view of the Gharial exhibit. Gharials are a species of crocodile with a very long narrow snout native to India.