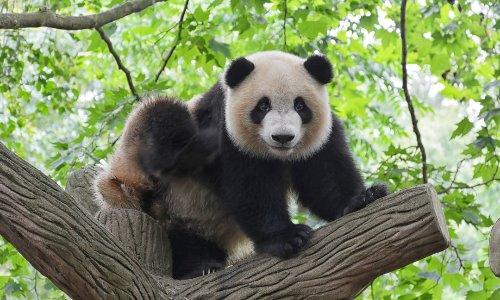 Apart from being extremely cute, Pandas are highly persistent creatures that do not give up that easily. The video provided below shows 4 panda cubs in a breeding center located in Chengdu, China. While the rest play and indulge themselves with other activities, one has the will to get out and explore the place. Despite trying very hard to come out, staff members present in the site keeps the panda cub back in its playing cage. It may seem adorable but it also proves how much these animal’s like to play and explore.

Opened in 1916, the San Diego Zoo is home to over 3 700 animals that come from over 650 species and subspecies. The Zoo is located in Balboa Park, San Diego. This 100 acre facility is an accredited member of Association of Zoos and Aquariums (AZA) as well as the American Alliance of Museums (AAM).

San Diego Zoo was amongst the first organization to develop the concept of open-air enclosures that provide the animals with a natural habitat landscape. In 1987, two black and white bears joined the vast family of animals living in the zoo. And since 2011, San Diego became one among 4 other zoos in U.S. to display giant pandas. Also, the zoo is unique for its achievement in successfully reproducing two panda cubs in U.S. soil that had survived into adulthood.

The zoo provides lush vegetation and other climbing structures to these pandas so as to replicate their natural habitat and keep them busy. After viewing these rare animals, tourists can visit the Giant Panda Discovery Center located inside the zoo where they can gather more knowledge about these animals.

Apart from that, webcams placed inside panda exhibit streams live videos on to the zoos website. Such monitoring helps researchers to learn more about their behaviour and needs. Moreover, the zoo is making use of such media to promote the cause of conservation and protection of these endangered species.

Zoo Atlanta is a 40 acre facility located in Georgia, USA. Being an accredited member of Association of Zoos and Aquariums (AZA), the zoo is home for 1500 animals from around 220 species. Some of the zoos priced collections are their Giant Pandas, Gorillas and Orangutans. Two Giant pandas made part of the family in 1999, when they were shipped from china under loan.

Webcams are placed within the panda exhibits for monitoring purposes. Also, these videos are streamed live on the zoo website. Visioning a brighter future for these endangered species with extensive conservation and awareness programs, the zoo has influenced many people around the world to join their cause.

Founded in 1889, the National Zoological Park is among the oldest national zoos located in Unites States. In all, the National Park is divided into two campuses. The first campus is a 163 acre facility located in North West Washington D.C.

The other part is a 3 200 acre massive facility called the Smithsonian Conservation Biology Institute (SCBI) is located in Virginia. Both campuses up together, provide shelter to around 2000 animals belonging to over 400 different species. Also, the facility is an accredited member of Association of Zoos and Aquariums (AZA).

Major exhibits present in the zoo are that of Giant Panda, Great Ape and Asia Trail. Out of the many exotic and beautiful animals present, the Giant Pandas have been a proud resident of the zoo for over 30 years.

Researchers and members of conservation program constantly monitor and study behaviors of the pandas located in the zoo. In order to facilitate their cause, there are installed webcams placed inside the exhibit to keep an eye on these playful animals. Also, with a motive of spreading awareness among the public, National Zoological Park uploads live Videos from the Panda exhibit to their official website.

Established in 1913, Edinburgh Zoo is an 82 acre facility located in Scotland. As of 2008, the zoo was home for some 170 species which was comprised of a population of over 1 050 animals. Over 600 tourists visit every year to enjoy the zoos major exhibits; these are Giant Pandas, Chimpanzees, Penguins and many more. Apart from being popular among tourists, the zoo is also an accredited member of several prominent associations. Giant pandas in the zoo are constantly watched and properly taken care of. Webcams located in the exhibit streams live videos of pandas on to the zoos official website. Conservation of animals and safe guarding biodiversity has been Edinburgh zoos main goals.

These webcams give you a live view of Panda bears in zoos and other habitats around the world. Sometimes you will be able to see live birth or a newborn Panda cub!

This giant panda webcam is located at the Adelaide Zoo in Australia, and has live streaming video of two pandas – Wang Wang and Funi.

Panda Cam at the Memphis Zoo

This Panda webcam comes to you live from the Memphis Zoo and has streaming video. It is online 24 hours a day and moves around during zoo hours – 9 a.m. to 5 p.m. This camera is controlled by panda keepers and research staff during the Zoos operating hours (9 a.m. to 5 p.m.)

These Panda Bear webcams are located at the National Zoo in Washington, DC and provide live streaming video of the Pandas (named Mei Xiang and Tian Tian) living at the zoo. There are two webcams to choose from .

This Panda Bear webcam is located at Zoo Atlanta in Georgia and gives a live view of Lun Lun the mother panda and her newborn panda cub! The cub was born on November 3, 2010. Watch the two on this camera with streaming video.