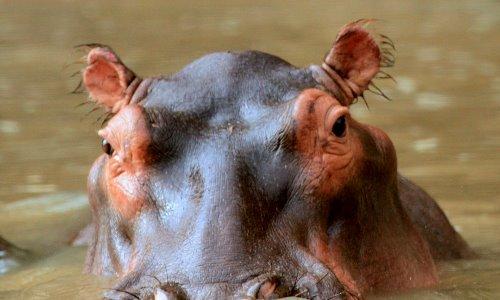 The hippopotamus, commonly referred to as the hippo, is primarily a plant sting mammal found in the Sub-Saharan regions of the African continent. Subsequent to the Elephant, the hippopotamus is one of two species of the Hippopotamidae family still in existence today.

To the naked eye the hippopotamus is generally sees as having a distinguishably barrel-shaped torso, almost hairless body, dwarfish legs, and massive mouth and teeth.

The male hippopotamus or bull is known to have an average weight of 3,000 pounds, with the female often weighing about 2,900 pounds. The male after birth will continue to grow throughout its life while female is known for reaching her maximum weight at the age of twenty-five.

The female hippopotamus however will generally reach sexual maturity between 5 to 6 years experiencing a gestation period of about 8 months, while the males are recognized as sexually mature at a later stage often between 7 to 8 years.

Recognized as one of the most aggressive and temperamental animals known today the hippopotamus is classified as undoubtably one of the most treacherous mammals in African wildlife less likely to be subject to predation by other animals. The female hippopotamus are known to generally attack as a means of protecting their young as young hippopotamus calves are routinely preyed upon by spotted hyenas, lions and Nile crocodiles.

A mature bull however will often attack another animal or hippopotamus in a display of territorial right by yawning and marking his territory by spinning its tail and defecating to scatter their feces over a large area. During combat the male hippopotamus will use its incisors as a means of defense against an attack and their canines to impose damage

Rarely will a hippopotamus kill another member of its species as challenges are usually decided when it becomes evident as to which hippopotamus is the superior one. When a hippopotamus habitat becomes overpopulated it is not uncommon for the male hippopotamus to sometimes try to kill the newborn calves, and although there have been reports of cannibalism among hippopotamus such incidents are not recognized as normal behavior but instead is thought to to be as a result of sick or disturbed hippopotamuses.

In spite of that, the hippopotamus are identified as an endangered species as they are frequently hunted by poachers for their ivory teeth and flesh.

The hippopotamus known for spending part of its life cycle underwater is classified as a semiaquatic mammal. Their eyes and nostrils are positioned on the roof of the skull thus remaining above the surface of the water allowing the rest of its body to be submerged for extended periods, moving along the bottom of the river due to their adaptable enormous weight and specific gravity.

Mostly inhabiting mangrove swamps, lakes and rivers the hippopotamus are known for their habitant in groups of five to thirty females and young where they are presided over by territorial bulls. The hippopotamus are known for achieving a lower body temperature and remain cool during the days by keeping their bodies partly submerged in the mud or water, later emerging at sundown to graze on the surrounding grass.

Facts about the Hippopotamus

▪  Next to the Elephant the hippopotamus is recognized as the third largest land based mammal and notably the heaviest even-toed ungulate.

▪  Regardless of the hippopotamus physical resemblance to the pig and other sublunary artiodactyls, the closest extant family today are from the order Cetacea known for including dolphins, whales and porpoises, from which the hippopotamus separated more than 50 million years ago.

▪  The oldest known hippopotamus fossil historically recorded belonged to the Kenyapotamus, a possible ancestor that lived in Africa during the Miocene epoch 8 to 16 million years ago.

▪  Notwithstanding its heavily built shape and dwarfed legs, the average hippopotamus is capable of running up to 19 miles per hour to easily outrun a human being over a short distance and although they lack the ability to jump, they are however able to climb up sheer slopes.

▪  The hippopotamus are known for experiencing childbirth and reproduction in the water.

▪  The adult hippopotamus despite its webbed feet and semiaquatic nature can neither float not is seen as a good swimmer. Instead they are known for moving using porpoise-type leaps from the bottom of the river.

The Toledo Zoo in the state of Ohio is regarded today as one of the leading zoological institutions and animal conservations found within the United States today. Accepted as an integral member of the Toledo community the zoo is known for capturing the attention of animal lovers from across the nation.

The Toledo Zoo contains a number of live webcams showing a wide variety animals found at the local zoo including two Hippo cams namely Hippo Cam #1 and Hippo Cam #2  at their Hippoquarium featuring their resident Hippopotamus.

South African owned, the Africam company since 1999 has been recognized as a pioneer in delivering compelling online video content by dedicating its services to offering viewers a first-hand view into African wildlife made available by a number of remotely located webcams and wireless transmitters located in the African bush.

Their Idube safari lodge located in the center of South Africa’s Greater Kruger Park, the Sabi Sand Game Reserve contains a webcam positioned at the Scotia Dam featuring a wealth of African wildlife including the Hippopotamus in their natural habitat.

The Live kenyan African Hippos Watering Hole Streaming Webcam from Kenya Africa made possible by the Mpala Research Center and Wildlife Foundation in Kenya Africa offers an enchanting view overlooking an African Hippopotamus Watering Hole located close to Mount Kenya, Laikipa County. Click on the link below to watch the hippos, among a variety of birds and animals found at this watering hole.