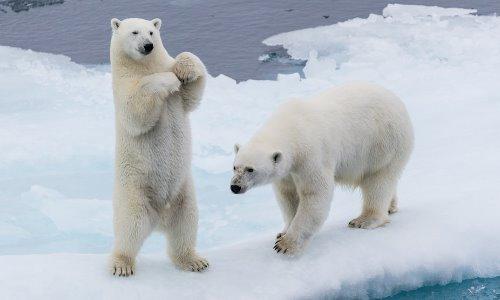 Polar bear experts try capturing the challenges faced by young polar bears during the summer months. But it eventually turns out to be quite challenging for the webcams to do so. These polar bears of Svalbard can’t help expressing their curiosity for this new technology.

The experts first try the snowball cams for capturing close actions which eventually get smashed by the playful bears. Even higher tech cams such as the blizzard cams (that can glide through ice) and drift cams (that can cruise through the water) falls prey to these amazing species.

This is a live experience of how it feels to be as close as you can to a live hungry polar bear. Now you’ll understand why polar bears are considered as one of the smartest mammals in this planet. As you can see the polar bear carefully inspects the glass cage before coming near it.

Then it tries to break open it from all angles and even sniffing around to find open gaps. It rocks the cage as much as it can. But its body gets overheated easily due to low temperature. So it wisely moves on once it realizes it can’t do much at the current circumstance.

Mark Dumas showing how calm and friendly these mammals can get once they get to be loved. Agee, the bear, is 18 years old and Mark is the only man who can swim with a polar bear. Here he captures pictures of his bear from the closest distance he can get to it. The bear shows off its skills in front of the camera. The polar bear is quite popular in ad films and has even acted in the film Alaska in 1995.

Here is the video footage in remembrance of KNUT the most popular polar bear to have lived in the world. Abandoned in this world by his mother at birth, he was raised by zookeepers in the Berlin Zoo and thus becoming the first bear to be raised in captivity in 30 years. He was found by Thomas Dörflein in Dec 2006. Ever since, his popularity soared to great heights. You can see the amount of care and love given to him during his 4 year lifetime.

Here is the video footage of the famous Churchill polar bears of Canada. The famous Tundra Buggy Lodge is strategically situated for optimum polar bear observation. This Lodge is famous for recording the day to day activities of the Churchill bears in a professional way with cams installed on the Lodge. They paired up with the Polar Bear International to provide the world an open window to the polar bear life. Ever since then, they have received great support.

Here is polar bear video footage of how polar bears hunt with the help of professional drift cameras. As you can see the polar bear goes into stealth mode to get to his prey. He swiftly dives under the floating ice caps closing its distance from the seal. Smartly it gets behind its target to look for its position. After carefully waiting he stalks the seal from its front. But his target was too swift to give him the slip. Due to low temperature of the Antarctica the polar bear wisely gives up the chase in order to prevent itself from overheated. The drift camera does a great job in capturing the detailed motion of the polar bear.

Born in November 22, 2011, Siku is a polar bear of the Scandinavian Wildlife Park, Demark. In Eskimo languages, the name is a common word for ‘’sea ice’’. Born to a female polar bear of SWP named Ilka, the baby bear was hand raised by the keepers of the park after his mother couldn’t feed him enough milk.

The fact that polar bears are completely dependent on sea ice for survival puts a massive threat to their species in accounts of the rising sea level and global warming. The annual loss in ice formation has made life worse for the polar bears in Artic. And the fact that humans are the sole reason for this mishap concerns scientists a lot.

Established in 1996, the Waspuk National Park (WNP) is located in the Hudson Plains ecozone, Canada. This park is ranked the country’s 37th National Park. Situated 45 km south of Churchill, the remote location of the park is attributed to the safety and preservation of wildlife.

Waspuk Park is a renowned site known by many animal enthusiasts as the best location to spot wild polar bears. Cape Churchill cam is located within WNP. Waspuk Park is an eminent maternity denning area for the polar bears and these cams work year round with a motive of capturing some of nature’s magnificent creature activities. At the months of October and November, bears group along the Hudson coast and wait for the ice to form over sea. This ice bed functions as a platform to hunt for their main food source- ringed seals.

Opened in 1916, the San Diego Zoo is home to over 3 700 animals that come from over 650 650 species and subspecies. The Zoo is located in Balboa Park, San Diego. This 100 acre facility is an accredited member of Association of Zoos and Aquariums (AZA) as well as the American Alliance of Museums (AAM). San Diego Zoo was amongst the first organization to develop the concept of open-air enclosures that provide the animals with a natural habitat landscape.

Every year, the zoo keeps on adding new features which is probably the reason for its huge success. Polar Bears are among the major exhibits of the zoo. These animals are monitored and tapped with the help of live cams. Such technologies aid scientists and animal enthusiasts to observe them on the internet. With this, the zoo seeks to draw attention of the masses over the issue of conservation of wildlife.

Situated in Swope Park, Kansas City the Kansas City zoo is 202 acre facility which is also an accredited member of the Association of Zoos and Aquariums (AZA). Opened in 1909, the Zoo currently shelters around 1 300 animals. The zoo is honored with several awards for its wide range of exhibits that covers animal species from almost all continents.

Its 95 acre land used for African animal’s exhibits has been ranked number one in the nation for “African Animals and Exhibits”. The zoo has 5 different areas with each region having its own theme such as Africa, Tiger Trail, Australia, KidZone and The Valley. Born in Toledo Zoo, Nikita- the Polar Bear is amongst the beloved animals in the zoo.

Berlin is a 23 year old female bear that has been brought up on loan by the zoo in an attempt to make her breed with Nikita. A live feed on this 6 year old male polar bear is streamed online. This is done to evoke awareness among the people so that the issue of depleting population of these polar bears can be brought up to them.

The Ouwehand Zoo is located in Grebbeweg 109, Rhenen. This facility is one among the many other attractions of the Gelderland Province in Netherlands. Other than several exhibits of various animal species, the zoo also has a large indoor play area for the kids.

The zoo shelters many species of animals such as Orangutans, white lions, tigers, gorillas’ and polar bears. Another popular feature of the zoo is its Berenbos, the Bear trail that takes visitors on a broad walk above bears and wolves. There are plenty of fine restaurants inside the zoo as well. State-of-the-art cameras are used to video tape the polar bears.

These videos are streamed online so as to encourage viewers to play their part in conservation and preservation of these endangered species.

Most of these cams are located in various zoos, but every once in a blue moon they will show up in the wild so you can watch them in their true, natural environment.

This Polar Bear cam broadcasts live from the Memphis Zoo in Memphis, TN. This webcam has streaming video and allows you to watch the polar bears swimming around in their pool at their zoo habitat.

This is an excellent polar bear webcam located at the Alaska Zoo in Anchorage. See the beautiful exhibit with trees and other scenery in the background. You can watch the polar bears swimming in the water, sleeping or walking around on the rocks. Image updates every second.

The San Diego Zoo has a high quality Polar Bear cam with streaming video. Watch three bears living at the zoo swim or playing on the rocks. If you visit the exhibit, there is a glass wall where you can watch them swimming underwater.

Here you can watch polar bears on two different webcam at the Toledo Zoo in Ohio.

This is an awesome – perhaps the best polar bear webcam out there. It is located at Zoo sauvage de Saint Felicien in Quebec CANADA and gives a live view of the polar bear exhibit. To top things off, this is an AXIS 214 PTZ Network Camera so you can pan, tilt and zoom. Change the cam source to get a different viewing angle.

Watch polar bears on exhibit at a zoo in Canada. This is a fun camera that can be remotely controlled. Pan, tilt and zoom and watch polar bears eating, sleeping, swimming and playing. Streaming video, too!