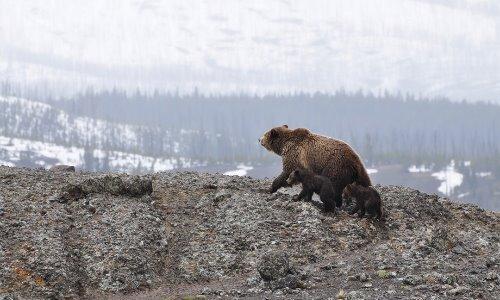 Grouse Mountain is located near Vancouver, British Columbia in Canada and it is home to a group of bears that calls the area their home all year long. The Grouse Mountain bears are usually Grizzly bears and will often live to an age of 25.

They are fast bears, achieving speeds of over 60 kilometers per hour when chasing something. Thanks to local resorts, it has become possible to view these animals in person, as well as on different webcams.

#1. Like other Grizzlies, the Grouse Mountain bears are distinguished by the large hump that is found on their shoulders. They typically weigh up to 350 kilograms, although female bears may be half this size. This makes these bears one of the largest land carnivores that lives in Canada right now.

#2. Grizzly bears typically stay within their home range, which for these bears is Grouse Mountain. Each bear will have its own territory on the mountain, but sometimes the claimed areas may overlap. When two bears believe they have a claim to a territory and the other bear is there, it rarely results in a fight.

#3. Grouse Mountain bears do not generally hibernate, even during the coldest winters. They will find a den and stay in there most of the winter. Many, especially the male bears, will stay active throughout the winter months.

#4. Grouse Mountain bears are very adept at catching salmon for food. A single bear might eat 100 pounds of salmon during a single hunting session. Grizzlies are also known to rely on berries and other plants to put on weight for winter. Up to 90% of the diet for these bears before winter may come from vegetation sources.

#5. Two bears on Grouse Mountain are regularly viewed by the public. Their names are Grinder and Coola. Both were found in 2001 and rescued. Both are male bears and a trip to see them includes a Skyride, breakfast, and interactive Ranger presentation.

#6. Although the Grouse Mountain bears are rather friendly with one another, most Grizzlies tend to be solitary animals.

#7. Grizzlies are sensitive bears and the Grouse Mountain bears are no exception. Thanks to many tiny muscles within their noses, they can smell a food source from several kilometers away.

It might not always be possible to visit Grinder and Coola in person. For that reason, these webcams have been setup so you can keep an eye on the Grouse Mountain bears from the convenience of a home computer or mobile device.

Grinder and Coola are known to “play fight” on a frequent basis. They find it particularly fun to play in the snow.