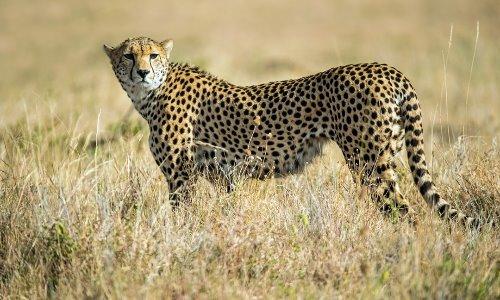 The only extant member of the genus Acinonyx and the closest relative to the puma and jaguarundi of the Americas, the cheetah can run faster than any other land animal in the world, often reaching speeds of up to 75 mph in short bursts covering distances of as much as 1,600 feet, and can accelerate from rest to 62 mph in three seconds.

Cheetahs are generally seen with a tan colored coarse short coat with round black spots of about one inch which not only provides some camouflage when hunting but is also used to easily distinguished them from other cats along with their small heads and ears, and distinctive teardrop stripes which extend from the corner of their eyes to the side of the nose.

An adult cheetah can weigh between 46 to 159 pounds and have a total body length of 59 inches with their tail measuring up to 33 inches in length. Males tend to be somewhat larger than females and will  have a slightly larger head, however there is no distinctive variation in size between males and females. The cheetah when compared to a leopard of a similar size is observed as having a shorter body and a longer tail which gives the cat more of a streamlined appearance.

Some cheetahs are known for having single recessive gene which allows them to have a rare coat pattern with larger blotch merged spots. They are commonly referred to as, “king cheetahs” and once thought to be a separate subspecies.

The cheetah is one of the very few cats with semi-retractable claws and has in many ways evolved to use its speed to successfully hunt its prey due to the evolutionary arms race between predator and prey. However the cheetahs’ only means of defense against another predator is its speed and as such is considerably poorly equipped to defend itself against a large predator.

The cheetahs’ ability to catch its prey is mostly dependent on its agility rather than its speed and will use its tail to help them steer itself when running much like the rudder of a boat.

Interesting Facts about the Cheetah

• The cheetahs’ diet consists of mostly mammalian herbivores under 88 pounds such as the blesbok, the Grant’s gazelle, the impala, the springbok, and the Thompson’s gazelle which are known for eating C3 plants. Occasionally the cheetah will hunt the young of a larger mammal such as wildebeests and zebras and even an adult prey when hunting in groups.

• There are several populations of the cheetah geographically isolated throughout southwestern Asia and Africa. In the Khorasan Province of Iran exists a small population of cheetah estimated at about 50 individuals which are protected by conservationists. Though possible, it is highly unlikely that some chetah still remain in India, despite the fact that there have been unconfirmed reports that Asiatic Cheetahs have been seen in the Balochistan province of Pakistan.

• The cheetah does well in areas consisting of vast expanses of land and an abundance of prey and will generally prefer an open habitat such as a prairie, semidesert, or areas consisting of thick brush and dense vegetation such as the grasslands of Namibia. The cheetah relies on tall grass as a form of camouflage when hunting. Unlike most big cats that hunt by night, the cheetah is diurnal and will mostly hunt during the early mornings or early evenings when the temperatures are cooler and where there is great visibility.

• The cheetah hunts its prey by sight rather than by way of scent and will usually have to stalk its prey within 33 – 98 feet before the chase.

• When hunting, only half of the chases which last from 20 – 60 seconds, are successful. During the chase the cheetah will trip its prey to the ground then killing by biting the underside of the neck to suffocate it. The cheetah must eat its prey quickly to avoid losing its meal to a larger and more aggressive predator. The cheetah stands a 50% chance of losing its kill to another predator.

• The cheetah in much of its former range was tamed and trained by ancient Egyptians for hunting. This tradition was later continued by the Persians and during the Aristocratic period where they were used to hunt antelopes in a similar manner as today as with members of the greyhound group of dogs.

• Female cheetahs are solitary cats and tend to avoid each other. Males however will occasionally live in small family groups called coalitions usually consisting of their brothers from the same litter. When in a coalition, a cheetah is six times more likely to secure an animal territory than when alone and will generally occupy the area between four to five years. Females have been observed to form mother/daughter pairs for a short time and will generally remain alone except when raising their young.

• For cheetah cubs, the first eighteen months are the most important as this is the period when they will learn the vital lessons of how to hunt their prey and how to avoid other predators. At eighteen months, the female cheetah will leave her offspring who will then form a group which will remain together for a further six months. Female siblings within the next two years will then leave the group while the adolescent males remain together for life.

• Unlike other big cats the cheetah does not roar instead uses several vocalizations such as, chirping when attempting to find each other, churring when offering a social invitation to other cheetahs, growling which is generally accompanied by spitting when angry, and purring whenever the cheetah is content.

• Cheetah cubs are known to have a high mortality rate resulting from genetic factors aside from often being preyed upon by other carnivores such as the hyena and lion.

The Africam Cheetah Webcam features a litter of cheetah cubs at the Hoedspruit Endangered Species Center in South Africa.Webcam.

The Metro Richmond Zoo Cheetah Breeding Facility features two live webcams offering an inside look at the a female cheetah Milani and her three cubs and a feeding tray where the cheetahs are fed between the hours of 9:00 – 9:30 am and 4:00 – 4:00 pm.