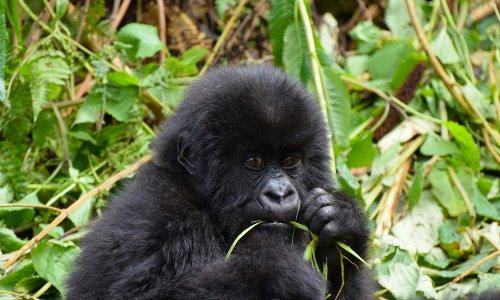 Predominantly herbivorous apes native to the forests of central Africa, Gorillas are classified as members of the family Hominidae and one of the four species of great apes. Gorillas are the closest extant relative to humans next to the chimpanzee, the bonobo and the orangutang.

The gorilla shares a similar DNA with humans from as much as up to 99%. Although the gorillas’ natural habitat covers a small percentage of subtropical forests of the African continent, they can be found in a wide range of elevations ranging from 7,000 to over 14,000 feet.

The mountain gorilla one of two species of the eastern lowland gorilla inhabits the Virunga volcanic mountains of Central Africa, within three National Parks: Mgahinga which is located in south-west Uganda; Rwanda in the north-west, and the Bwindi Impenetrable National Park located in Uganda. The western lowland gorilla mostly inhabits dense forests, lowland swamps and marshes in Central West African countries.

Interesting Facts about the Gorilla

• Much like other great apes the gorillas’ arms are longer than their legs which allows them to move around by walking on all four limbs known as knuckle-walking, though sometimes they may walk bipedal while in defensive situations or when carrying food.

• Adult male gorillas are known as ‘silverbacks’ due to the characteristic silver hair on their backs which extends to their hips. Silverbacks can grow up to 5 feet tall and weigh over 500 pounds.

• Based on their species, gorillas can very in appearance. Though for the most part, western subspecies are known for their brownish-gray color, while mountain and eastern gorillas tend to have a darker colored coat. Mountain gorillas have a thicker and longer coat which allows them to adapt to the cold climate of their mountain habitat while the lowland gorillas tend to have a shorter and fine coat.

• The gorillas’ diet differs in-between species. Mountain gorillas are primarily herbivorous and will mostly eat foliage which may include leaves, pith and shoots, and some fruit. Eastern lowland gorillas have a more diverse diet which includes foliage, fruit and insects, preferably ants. Western gorillas tend to depend mostly on fruits and insects such as termites and ants as a source of food.

• Because the gorillas’ diet will mainly consist of succulent vegetation which is mostly comprised of water, gorillas will seldom drink any water, though occasionally lowland and mountain gorillas have been seen drinking water.

• It is estimated that there are over 100,000 lowland gorillas in existence, with 4,000 of the eastern lowland gorillas’ population in the wild and 24 confined to zoos. The critically endangered Mountain Gorilla subspecies population is observed at as few as only 620 individuals in the wild and none in zoos with the severely endangered Cross River Gorillas numbering less than 300.

• Gorillas unlike the chimpanzee and orangutang are ground-dwelling and will generally construct a nest made of leaves and foliage on the ground to sleep. At birth infant gorillas are considered helpless and will weigh between 3-4 pounds. Infants will generally learn to crawl after about 2 months and will walk by the time they are 8-9 months.

• Young gorillas when nursing will share a nest with their mothers until age three when they become independent and will build nests for themselves yet close to their mothers. As they become older young males will leave the group to live their lives as solitary silverbacks or to create their own troops. Unlike Eastern lowland gorillas, the adult silverback Mountain Gorillas have been known to remain within their group and subordinate to the the silverback, later becoming the dominant male in when the silverback dies.

• Gorillas live in social groups of 6-12 individuals called troops which consist of one adult male, “silverback” along with several adult females, their offspring and younger males known as blackbacks. Adult males or silverbacks make the decisions for his troop which include when to wake, when to eat, when to move and when to rest. Due to their protective nature of their troop silverbacks often tend to be most aggressive and will beat his chest and charge towards a perceived threat. When the troop is attacked by a predator, the silverback will protect the group even at the cost of his own life.

• The average gorillas’ lifespan can range between 35 to 40 years, though gorillas in captivity have been known to live for over 50 years. The first gorilla to be born in captivity, a female Western Gorilla Colo was born at the Columbus Zoo and Aquarium in Powell, Ohio, United States is the oldest living gorilla in captivity.

• Besides the threat from poaching for their coats, and from diseases such as the ebola virus, increasing human population also poses a severe threat to the existence gorillas. Mountain Gorillas which inhabit higher elevations however are impacted by climate change which can alter their habitat and agriculture yields in surrounding communities.

This webcam shows a live video of the Western Lowland Gorilla at the Kingdom of the Apes exhibit at Toledo Zoo which is part of a Species Survival Program to repopulate and provide a link between animals in the wild in an effort to prevent the extinction of this endangered species. The zoo which is located in Toledo, Ohio, United States is home to seven Western Lowland Gorillas.

The San Diego Zoo by way of its website features a live webcam of its resident gorillas going about their daily activities in a naturally created habitat.