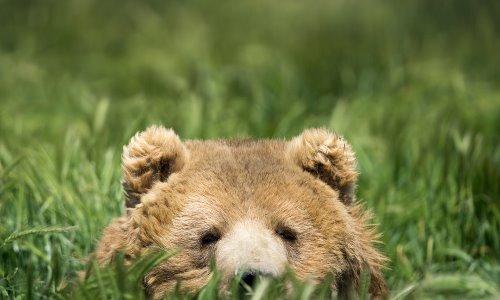 Kodiak bears are only found in the islands of Alaska. The area, which is called the Kodiak Archipelago, has caused these bears to be isolated from other bears for over 10,000 years. It is recognized as one of the two largest bears in the world today.

Only the polar bear is larger. Kodiak bears are also showing impressive population growth rates, with more than 3,500 bears on the Archipelago according to current counts.

#1. Kodiak Bears are one of the largest North American animals that are not on an endangered species list. Their population numbers are quite low compared to other species, but through management and isolation, these bears are able to thrive.

#2. These bears are often referred to as the largest carnivore in the world, but they’re actually an omnivore. Berries, plants, and various grasses are just as important to their diet as catching fish during a salmon run. Because of their size, it is rare for a Kodiak bear to actually try to chase down an animal to have a meal.

#4. Most Kodiak bear cubs will stay with their mothers for a minimum of 3 years. This is because the primary cause of death for these young bears comes from attacks initiated by male Kodiaks. 1 in 4 Kodiak cubs will be killed before they reach the age where they’ll leave their mother.

#5. Kodiak bears have co-existed with humans for thousands of years and the encounters are generally peaceful. The bears that are most likely to cause trouble are those that have recently left their mothers since they are still trying to find their way in the world.

#6. The Kodiak bear does not hibernate in the same way other bear species do. Kodiak bears will “den” instead. Denning generally begins in October, with the sows who are pregnant starting the process. Male bears will begin denning in November or December, but some bears may choose to stay awake all winter long. The bears that do start the denning process will not emerge until April. If cubs are born during the season, then they may not emerge until June or July.

#7. About 5,000 hunters apply for permits every year to hunt these bears and only 10% will receive one. If someone from outside of Alaska obtains a bear permit, they must pay a professional guide to assist them and the cost of this can exceed $20,000.

September and October are the two best months to catch Kodiak bears on a web camera. Some sightings also occur in July as mothers and their cubs emerge from denning.