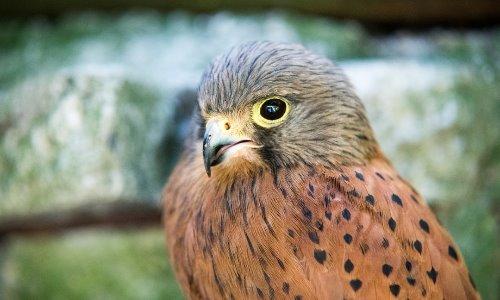 Widely distributed across several continents with the exception of Antarctica, the falcon is the largest member of the Falconinae subfamily of Falconidae.

A falcon is generally recognized as any bird of the 37 species of raptor in the genus Falco and include species such as the gyrfalcon the largest species of falcon, the medium-sized lanner falcon native to Africa, southeast Europe and Asia, and the smaller more robust and and heavily built species known as the merlin falcon also commonly known throughout North America as the pigeon hawk.

Falcons are categorized into three groups. The first group includes the kestrels which are generally seen as small and stocky falcons mostly brown in color and occasionally sexually dimorphic.

The second group consists of slightly larger and more elegant species characterized by a considerable amount of dark plumage around the cheeks. The third group includes the variably large and powerful peregrine falcon and subspecies of the group which are easily distinguished by their medium grey color and sometimes appearing with a lighter brownish color on the upper side.

• The term used to describe a male falcon is, tercel which came out of the belief that one out of every three eggs hatched by a falcon gave birth to a male.

• Unlike other diurnal birds of prey within the order Accipitriformes such as hawks, eagles and kites all of which are known to kill their prey using their powerful talons, Falcons kill their prey by using a “tooth” located in the side of their beak.

• An adult falcon is noted for its thin tapered wings which allows it to achieve higher speeds and faster navigation. During their first year of flying, fledging falcons have longer flight feathers much like that of other birds. This makes flying easier while learning the skills required skills to become exceptional hunters when adult.

• Falcons such as the peregrine falcon, historically known throughout the North American region as the “duck hawk” can dive at record speeds of up to 200 miles per hour recognizing them as the fastest-moving creatures on Earth. According to the National Geographic Television program, the highest diving speed measured of a peregrine falcon was recorded at 242 miles per hour or 389 km/h.

• Next to the rock pigeon, the peregrine falcon is the most widely found bird species and the most widespread raptor worldwide.

• The Lanner falcon commonly found in the open country and savanna is thought to be the oldest living species of Hierofalcon (four closely related species of falcon which make up the subgenus of Heirofalco and include the Lanner falcon, the Lagger falcon, the Saker falcon and the Gyrfalcon). Unlike the peregrine falcon which hunt their prey by swoop, the lanner falcon hunts mostly by engaging in a horizontal pursuit in flight.

• Lanner and Peregrine falcons due to their strong hinting ability, high trainability and effectiveness on most game bird species small to large, are often bred in captivity for falconry (the tradition of hunting of wild quarry in its natural state and habitat by means of a trained captive bird of prey).

• Hobbies are seen as fairly small, extremely swift falcons with narrow wings and are considerably superb aerialists. Hobbies will occasionally take prey on the ground if the opportunity presents itself however most hobbies will tend to mostly catch their prey by way of hawking (catching flying insects in the air).

• While other falcons are more adaptive to active hunting on the wing, kestrels which are mostly brown in their plumage are notable for their typical hunting behavior of hovering between 35 to 65 feet over open country and swoop down to catch their prey. Kestrels can fly in stationary air and can hover while facing towards the slightest headwind and are known to mostly prey on lizards, small mammals and large insects.

• The American kestrel is the only extant species in the Western Hemisphere termed “kestrel” which according to molecular data and morphological peculiarities such as its grey wings among males and black ear-spot views the kestrel in the phylogenetic sense as not a kestrel but rather closer to the species of hobbies.

• Much like many other birds of prey known for their extraordinary vision, falcons can see as small as a 10 cm object from a distance of over 1.5 km. In fact one species is known to have a visual acuity of 2.6 times that of a human being.

• Because Peregrine falcons are known to prey on other birds, they are particularly susceptible to changes in health of the surrounding environment. Between 1950 to 1970 the widespread use of certain pesticides such as DDT known for pesticide poisoning resulted in the Peregrine falcon becoming an endangered species.

However since the early 1970s with the large-scale support for the protection of the species and with the ban on the use of DDT the population of Peregrine falcon has rebounded.

The Ohio Department of Natural Resources located In Columbus, Ohio features two live web-based video streams of peregrine falcon nests found on the 41st floor of the Tower of the Rhodes State Office in Columbus, Ohio

This Falcon Webcam made available by EarthCam Networks allows online viewers a close up look at a Peregrine falcon nest on top of the NRG’s power plant in Waukegan, Illinois. This online expedition to study falcons launched by the Director of the Chicago Peregrine Falcon Program and Field Museum scientist, Mary Hennen along with her research team for the last two decades have successfully helped reintroduce the once endangered Peregrine Falcons into the Midwest.