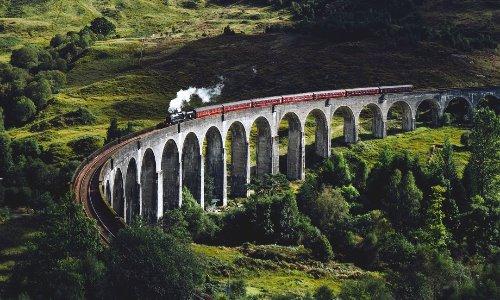 A general form of rail transportation composed of a series of vehicles running along a rail track, trains are often used to transport passengers as well as cargo. In addition to the traditional railway trains another form of railway transportation used today is the Maglev. Derived from magnetic levitation Maglev uses the technology of magnetic levitation to carry the train wheels via magnets rather than the traditional wheels, bearings and axles by levitating the train a short distance away from the railroad guide.

Most trains are powered by a separate locomotive or individual motors in a self-propelled train rail-car capable of connecting with similar type carriages while still being fully operated from one driving cab. And although steam propulsion was primarily used throughout railway history, the most common forms of motive power today is electric via additional rails and overhead wires and diesel fuel. Additional forms of motive power previously used throughout railway history include gravity, horses, gas turbines, batteries and pneumatics. Many of the train tracks today in a more modernized effort can often be seen comprising of two to five rails with a just a few number of maglev and monorails.

This live video stream is taken from North Platte, Nebraska in the United States and one of the largest railroad classification yards in the world from a web cam positioned on top of the Union Pacific’s Garden Spike Tower.

Click on the link below to see trains departing daily at 10:00a.m and returning at about 4:30pm Mountain Standard Time.

The Chesterton East Railroad west Web cam taken from the Norfolk Southern mainline at Chesterton, Indiana. The camera providing the livestream is supported by RailStream and Riley’s Railhouse and is located at MP CD 418.2 NS Chicago Line – Dearborn Division.

Click on the link below and you’ll be able to experience some of the most exiting rail – activity offered in the Midwest.

The Cresson Railroad Web cam in Pennsylvania is provided in the link below is hosted by RailStream ans is located on the NS Pittsburg Line – Pittsburg Division at MP 251.2.

Here you can watch trains all around the world on webcams located at the train stations and sometimes even looking out from the engines. Train types include freight, subways, high speed rail, street cars and more.

This passenger train webcam is located in Switzerland and gives you a view from the engine looking out the windshield.

This train rail cam is located in Plattling, Germany and features a view of several train tracks. Webcam image updates every second.

Live webcam at the Austin Steam Train Association in Texas. This is a Live view – AXIS 211 Network Camera.

This train cam gives a live view of a railroad station in Fremont, California. Watch trains going by, see people waiting for trains and more. Image updates every few seconds.

This site has several different webcams that give views of railroads located in California, Oregon and Pennsylvania. Includes archived images and video.

This cam lets you see a large, professionally built model train set complete with scenery, miniatures, landscape and more. The site has a whopping 7 different webcams to view the model train track and see a table area where people socialize. sure on that. Some webcams have PTZ capabilities and have streaming video.

Ever wanted to know what it was like to be a truck driver? Watch from the view of the dashboard as a truck driver travels across America. Includes a map of his current route and location.

Webcam gives a view of a cute little train at an amusement park in Plochingen, Germany.

This site has several different train webcams located in La Plata, Missouri and other locations. See trains going by at various train stations and watch people waiting for trains.