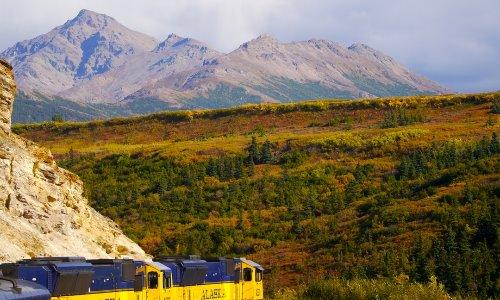 Located at Denali National Park, Alaska and close to the McKinley Park visitor’s center, the Denali Depot is a railroad station offering passenger service for the Alaska Railroad.

Interesting Facts About The Alaska Railroad Depot at Denali

• In 1914 under The Alaska Railway Act the federal government built a railroad to connect Alaska’s extensive mineral resource to an ice-free port.

• Notably the route elected by President Woodrow Wilson from Seward to Fairbanks in 1915 vastly contributed to the establishment of a national park in 1917 for the preservation of wildlife.

• Camp Riley which once featured barns, crew quarters, a blacksmith shop, a field hospital and several other sundry businesses was established by The Alaska Engineering Commission. However shortly following the completion of the Camp Riley Bridge Camp Riley was evacuated.

• During the summer Denali Depot hosts hundreds of passengers daily by way of a southbound train arriving at noon from Fairbanks, a northbound train arriving from Anchorage at 4 pm as well as several other express trains on other days. However during the winter season the Denali’s service is restricted to Saturdays and Sundays only serving trains arriving north from Anchorage and south from Fairbanks.

Click on the link below and enjoy a view high above the Visitor Center overlooking the park boundary centermost to the Yanert River Valley beyond. During winter, this region is where the sun first rises and lingers low over the horizon.