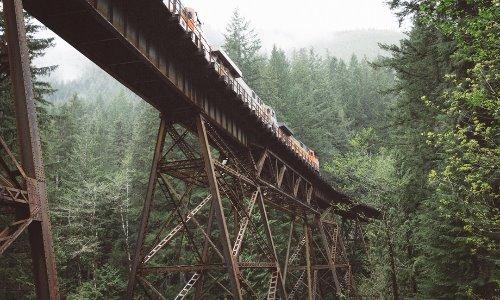 Located in the United States and one of the country’s heritage railways, The Conway Scenic Railroad of North Conway, New Hampshire since 1979 is listed on the National Register of Historic Places.

Interesting Facts About The Conway Railroad

• Owned by Conway Scenic and president Russ Seybold, Conway Railroad operates the line which runs from North Conway to Conway and once part of the Boston and Maine Railroad Conway Branch while the Conway Railroad Mountain Division owned by the State of New Hampshire operates the line once part of the Maine Central Railroad’s Mountain Division which runs from North Conway to Fabyan passing through Crawford Notch.

• The railroad operates the “Valley Train” excursion which includes the Gertrude Emma (an open-deck Pullman observation car), several renovated coaches dating back to the 1920s, and a Chocorua dining car is offered by way of a 55-minute return trip south to Conway or a 1¾-hour round trip north to Bartlett.

• The railroad additionally operates a 5-hour excursion aboard a”Notch Train” which runs on a line through Crawford Notch and includes Dorthea Mae (a vista dome car), Silver Cascade #1308 (an open-air car, as well as several retired commuter coaches from the Montreal commuter pool. During the fall season the “Notch Train” is extended by a ½ hour when the train travels to the Fabyan Station near Bretton Woods in the town of Carroll.

• In 2009 the railroad operated the first and only revenue scheduled freight move for Conway Scenic through Crawford Notch since 1983. The first of any kind since 1984 a 20-axle Schnabel car carried a 227-ton transformer for the electrical utility company Public Service of New Hampshire

• In 2010 the railroad added a restored 1950s dining car to the train. The car which first which constructed as N&W Powhatan Arrow 492 was later designated Hattie Evans.

• Special events are annually held at the railroad include the 2014, 2015 Massachusetts Bay Railroad Enthusiasts sponsored “Steam in the Snow” photographer’s event in January, the Thomas Railfan Day held on the first Saturday of September, and Polar Express-themed trips during December.

Click on the link below and watch a live video of Union Pacific freight trains through downtown Conway, Arkansas.