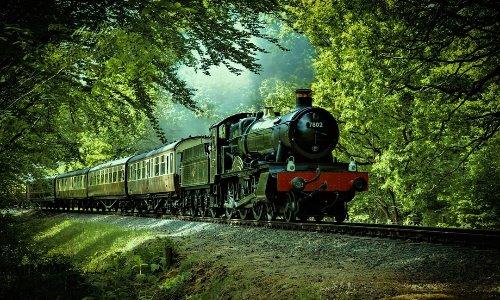 “A Place Born For Those Too Late” the secluded New Mexico mountain village of Chama is the Cumbres & Toltec Scenic Railroad’s western terminus.

Once recognized as a junction located on the San Juan Extension North from Alamosa to Durango, Colorado the Cumbres & Toltec section between Chama and Antonito, Colorado is today maintained as a 65-mile-long memorial known for having some of the most remarkably beautifully isolated mountains scenic landscape in existence today.

• A trip to Chama takes you back to the 1950s and a time when the railroad serving as a Class I railroad offered regular steam service served before being shut down in 1968. Later through the efforts of a group of volunteers joined by the states of Colorado and New Mexico Chama’s railroad has today become one of the most historic sites in the United States.

• Chama’s railroad yard serving between five to six of the railroad’s ten locomotives is recognized as having the Rio Grande’s largest collection of railroad equipment in existence.

Occasionally you might spot a deer each day at about dusk. Chama’s Depot camera offers viewers a first-hand view of the equipment and historic Rio Grande Depot. Tune in each morning for a spectacular Chama sunrise.