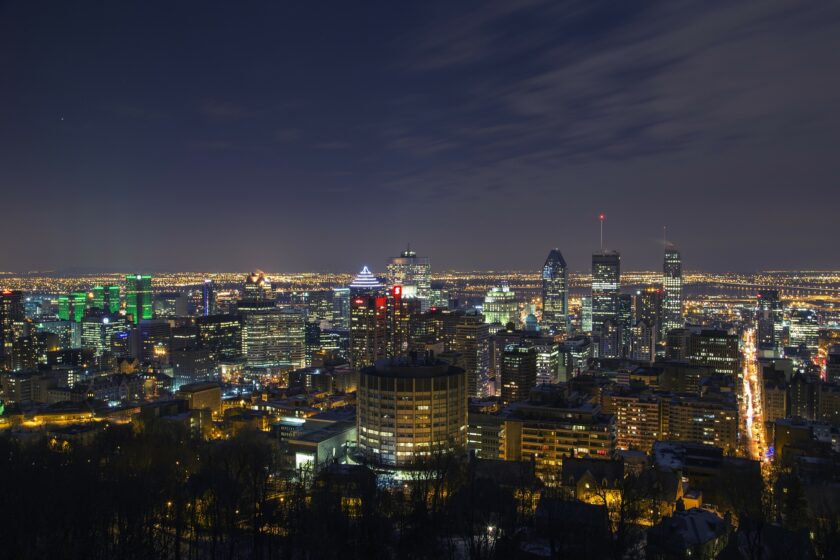 The people of Montréal may be warm and friendly (especially if you can speak a little French), but that warmth comes from their hearts, not from their weather.  As D.H. Lawrence once observed of whales, “They say the sea is cold, but the sea contains the hottest blood of all…” such is Montréal.

The second largest city in Canada, Montréal derives its name from centrally located Mount Royal, so named by Jacques Cartier in 1535 C.E.  The city itself is not what you would call a hot-spot in terms of temperature.

In the Northern Hemisphere the peak summer temperatures occur between June and August.  During that period in Montréal temperatures hover between 15° C and 21° C (60° F to 70° F), or what many might call room-temperature.  Excursions into the 30s are almost unheard of.

If you love the rain then Montréal might be the city for you since it rains every three or four days.  By extrapolation that means 75% of the time it doesn’t rain.  Liking the rain, and getting frequent breaks from it might be the ideal combination.  As a consequence, Montréal receives about one metre per year of the liquid-sunshine.

The temperature plunges below 0° C (32° F) in November descending to a chilly -10° C (14° F), and staying in that territory until the end of March.  Certainly a boon to those wishing to skate or play ice hockey on the local pond!

With everything from the outdoor dancefloor of Igloofest (a world famous electronic music event), to light-duty skiing on Mount Royal, skating rinks all over the city, bars, restaurants, and special events, most people can manage to have a good time in Montréal.

The Plateau Weather Webcam at the corner of Fabre and Mont Royal updates every 5 seconds and can give a good idea of current conditions.  Another, located high atop the Marriot Hotel Château Champlain is even more revealing with its panoramic views of the Dominion and Dorchester Squares as well as Mount Royal itself.

But the piece de resistance for cameras in the Montréal area are the traffic cams!  Approximately 136 of them cover everything from the Mirabel Airport to all the major routes on the islands and almost every bridge connecting the mainland to the islands.  Click on any one and you are instantly taken to a five-second loop that updates every minute or so.

Of course the problem with constant reliable precipitation every month in combination with below freezing temperatures for five months of the year means that you’re going to have an awful lot of… you guessed it… snow!  Of course Montréal has learned to cope with it, as seen in this video.  Truck after truck, in a constant parade, all carrying away tonnes of snow from the city streets.

For the remainder of the year anything above 10° C (50° F) might find people wandering around in shorts and T-shirts.  After all, they are Canadian!

If you really need to know what’s going on and then Weatherspark is the place for you.  There you can get in-depth reporting, with a level of forensic detail that will satisfy the most curious among you.  You can find out how much it rains in every given month, what percentage is light rain, thunderstorms, or moderate rain; you can discover that in the cold season the snowfall is typically 64% light snow, 15% moderate snow, 8% light rain, and 7% heavy snow.

Of course, being in Canada, the first choice is usually Environment Canada, the usual choice for national weather reporting—that is unless you prefer your reporting en Français.  There you can get all sorts of alerts for impending storms or just a simple 7-day forecast, as needed.

Finally there is AccuWeather, ready with a normal forecast, as well as how much cloud cover they’ll be tonight for star watchers, or the likelihood of migraine causing conditions; also available are radar images, the-month-ahead, or what you can expect this weekend.  They even sport a minute-by-minute forecast for the next 2 hours based on your precise location, including type and intensity of precipitation, and exact starting and stopping times.

But it doesn’t stop there.  They have selectable tabs for a custom report tailored to your needs.  You can get custom reports on how the day’s weather is going to affect Colds & Flu, Allergies, Respiratory, Arthritis, Sinus, Migraines, Travel, Astronomy, Events, Driving, School Day, Hair Day, Snow Days, DIY Projects, Lawn & Garden, Home Energy, Entertaining, and nine different types of sports and recreation reporting that can be affected by weather from Running, Biking, and Hiking, to Hunting & Fishing, Skiing, or Sailing.

Montréal is a beautiful city that remains enjoyable and uncrowded most of the year, with plenty of diversions where you can tour a stunning Basilica, enjoy a remarkable array of divergent architectures from Italy, France, England, or just about anything else you can imagine.  And you’ll find plenty of world class restaurants, bars, and nightclubs to enjoy.  And there’s almost always a festival or an event to stir your imagination.  Drop on by!