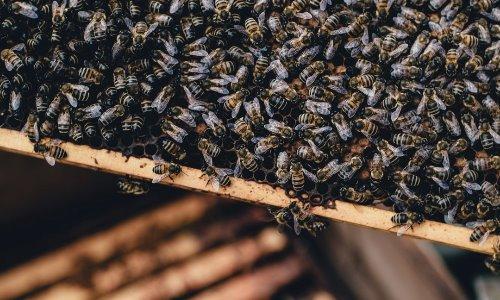 The honey bee often referred to as bees of the Apis family are genetically identified by their ability to produce and store honey in addition to the constructing of perennial, nest for their colonies made from wax. The honey bee today is the only existing member of the Apini tribe in the Apis family. To date only seven species of the honey bees are known to scientists.

This accounts for a total of 44 subspecies of the honey bee in spite of the fact that historically up to 11 species were acknowledged. The number of honey bees extant today is viewed as only a small percentage of the approximately known 20,000 species of bees and although there are other types of bees known for producing and storing honey, only members of the Apis genus are classifies as real honey bees.

▪  The origin of the honey bee is thought to have begun in the regions of South and South East Asia including the Philippines with the earliest appearance of the honey bee in the European deposits fossil record dating back to over 56 million years ago. The closest known living relatives to the honey bee including the stingless and the bumble bee are characterized to some extent as social organisms exhibiting a collective behavior that predates the emergence of the genus. Among the known living members of the Apis genus;  the more basal species of the honey bee is known for making single, unprotected combs while the more recently developed species are known to nest in cavities consisting of multiple combs which has greatly contributed to their domestication.

▪  Drone bees or males are produced from unfertilized eggs and as such are the only genetic representation of the queen laying the eggs and are recognized as sharing one mother. Both Queens and Worker females are produced from fertilized eggs having both a mother and father. The queen bee when mating will mate with multiple drones occasionally on more than one mating flight. Once the queen had mated she then lays the eggs, fertilizing them with the sperm received from the male and kept in the spermatheca.

▪  Historically a large number of bees have been cultivated and exploited by humans for their production of honey and beeswax. The two main species of honey bees cultivated, and transported by beekeepers are the A. mellifera and the A, cerana indica. Beekeepers today are known for building modern hives facilitating the transportation of the bees in-between fields whenever crops are in need pollinating. Through this process the beekeeper is allowed to levy a payment for the pollination service, in event reestablishing the previous role of the traditional self-employed beekeeper to a more commercially large-scale operation.

▪  As with a small number of eusolocial bees, a colony will generally be made up of a fertile male and one queen bee and up to several thousand seasonal fertile males or drone bees in addition to a large population of sterile female workers. The eggs are laid by the queen singly in a wax honeycomb created by the workers. Drones are developed from the unfertilized eggs while females, workers and future queens are produced from the fertilized eggs. During the early stages in the life of the bee, the larva are fed with royal jelly made from the young workers and will switch to feeding on pollen as they mature.

▪  The job of the worker bee in the colony is to feed the larvae and clean the hives. As soon as they are unable to further produce the royal-jelly, they effectively begin a new role of building comb cells then later moving on to take on new tasks within the colony such as acquiring pollen and nectar from forager and even guarding the hive. Eventually a worker bee will leave the hive after taking her first orientation flight subsequently spending her remaining life collecting pollen and nectar.

▪  Worker bees are known to collectively find their food and communicating with each other by using a pattern of dancing, often referred to as a waggle or bee dance. Although the dance may vary among species, all extant Apis are known for displaying some form of behavior to convey information respective to the food resources. When resources are found close to the colony the workers will often perform what is seen as a less form of expressive dance known as a “round dance”

The explore.org website allows visitors a first-hand infrared view of a beehive located inside a hollow log within the town of Waal found in Bavaria, Germany. The bee cam shows the complicated inner operations of the colony as they build their communal home by constructing combs, produce honey, provide new generations of drones and workers and protect their queen.

The People’s Garden Apiary situated on top of the Jamie L. Whitten Building at the United Stated Department of Agriculture houses more than 40,000 Italian honey bees. The beehive which is made up of wooden box-like structures placed on top of each other. Each of these box-like sections often referred to as super contains 8 – 10 wooden like frames each of which holds a narrow sheet of wax structure used by the bees to build their combs.

Viewers to their website accessed by clicking the link provided below can watch a live broadcast of the beehive bursting with activity as female bees collect pollen and nectar and turning it into honey.

Watch honey bees on this live webcam. Gives you a highly detailed view of the bees working on their hive. A nice promotion for Vcelovina Honeywine if I do say so myself…

This is a brand new bee hive webcam that provides live streaming video and a nice closeup of bees making honey in their beehive. Webcam is online night and day.