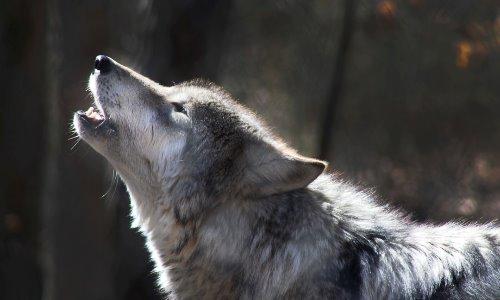 The gray wolf often referred to as the grey wolf from the biological family of carnivores including foxes, jackals, coyotes and dogs are predominantly found in the isolated areas of Northern Africa, Eurasia and North America.

As the largest member of the canid family the average male wolf will weigh anywhere between ninety-five to ninety-nine pounds with the typical fem ale weighing eighty to ninety pounds.

Similar in its general appearance to the conventional German Shepherd dog the wold has been observed to possess a slightly larger head, longer legs, bigger paws, straighter tail and much more of a narrow chest with a long and bushy winter coat and mainly molten gray in its color.


Facts about the Wolf

▪ Wolves are social animals often traveling in family groups of adults and offspring generally with a mated pair.

▪ Considered as an apex predator or super predator residing at the top of their food chain, the wolf will primarily feed on large hoofed mammals occasionally feasting on smaller animals, carrion, left over garbage and livestock.

▪ The wolf as the sole ancestor of the dog which was first domesticated within the Middle East has been despised and hunted by mankind for centuries due to their continuous attacks on livestock. However they are revered and highly respected by most of the Native American Indian Tribes found today.

▪ Many of the recorded attacks by wolves on humans have been accredited to wolves infected with a viral disease affecting the brain of humans and animals known as rabies. There are however, though unusual a few attacks by non rabid wolves on adults and even children as most wolves will tend to distant themselves from humans out of fear from shepherds and hunters.

▪ Although the global population go the wolf is not considered to be threatened the trapping and hunting of wolves over decades has reduced the population by almost a third of its original capacity.

▪ The first documented wolves were noted to have appeared during the North American faunal stage. A small species bearing a close resemblance to the conventional red wolf known as C. priscolatrans after crossing the Bering land bridge were found to colonize Eurasia gradually evolving into the C. mosbachensis and subsequently into the C. lupus.

▪ During the latter stages of the Rancholabrean North American Mammal Age the C. lupus species colonized the regions of North America outliving the Canis dirus larger species of the wolf previously established there evolving to be come known as the species of the Grey wolf seen today.

The Dublin Zoo located in London, Ireland is a private society funded by a group of wealthy subscribers and founded by physicists and anatomists on September 1st 1830. The zoo featuring 72 birds and over 46 mammals donated by the London zoo took the decision to open its gates to the public on Sundays at the cost of a penny per person as a gesture leading to the warmhearted and esteemed relationship enjoyed by the ah-Zoo in the Phoenix Park and the Dubliners to this very day.

As one of the oldest and globally recognized zoos the Dublin Zoo in recent times has been revamped into a 28 hectare park consisting of a number of lakes, natural habitats and gardens for more than 450 animals. The Dublin zoo houses a number of wolves which can be viewed publicly through their live webcam over the internet while they are being fed. Feeding of the wolves is usually done Mondays, Wednesdays and Fridays during the morning hours.

Wolves at the International Wolf Center

The International Wolf Center located in Ely, Minnesota in the United States of America is an organization dedicated to the survival and preservation of the wolf by educating members and locals about the relationship between the wolf and humans.

Visitors to their website may join the pack allowing them to contribute to their efforts financially or by sharing the knowledge in support of providing the necessary facts about wolves. The International Wolf Center conducts a live-broadcast via two webcams of their ambassador wolves.

Wolves even in captivity have been found to be highly elusive however viewers may still be able to catch a glimpse of these wolves by closely looking in the background beneath the trees.

Algonquin Park located in Ontario Canada is today one of the oldest and popularly protected areas utilizing live webcam streaming of their extensive backcountry of over one thousand two hundred miles of canoe paths, more than one thousand sparkling lakes and a variety of animals including Moose, Black Bears and a number of Eastern Wolves.

The Wolf Conservation Center established by Helene Grimaud in 1999 is a non-profit private education and environmental organization located within the United States South Salem, New York has been dedicated to the the conservation of the wolf population by educating individuals about wolves and their environmental relationship with humans and why they should be protected.

Through a number of international and onsite programs the Wolf Conversation Centre has been able to teach persons on the importance of the biological and ecological benefits of the wolf. Through a series of live enclosure and den webcams, the Wolf Conservation Center provides viewers with a first hand observation of a number of wolves including the brother and sister Ambassador wolves Zephyr and Alawa. born in captivity in the Rocky Mountains of Canada.