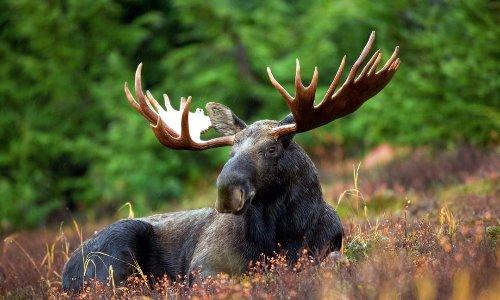 Known as the largest singular genera of the deer family, the moose according to North American folklore or Eurasian elk in European culture are most distinguishable by the leaf shaped antlers of the male species as opposed to the twig-like antlers commonly recognized in other members of the deer family.

The moose is known for conventionally inhabiting temperate broadleaf, mixed forests and taiga forest regions found in the Northern Hemisphere containing tepid to boreal climate conditions. Traditionally the species were found to roam over a wider range of landscape, however mankind’s sporting activities including the hunting of the animals in addition to urban development have resulted in a significant decrease in their numbers.

A large majority of the moose found today has been actively relocated into areas previously inhabited by the breed and as such are mostly found in a number of countries including Alaska, Russia, Scandinavia and Canada.

The moose contrary to its relative deer species are observed as solitary animals not forming herds and can be found grazing by themselves maintaining a diet mainly comprised of aquatic and terrestrial vegetation and hunted by a range of predators including bears, wolves and man.

Although often viewed as a lethargic and slow-moving animal, the moose can quickly transform into an aggressive beast moving quickly and violently when frightened or angered as seen during their mating season during the autumn months when males can be seen competitively fighting over females as shown in the video below.

Facts about the Moose

The Orrviken Moose Garden resort located in Jamtland, Sweden provides visitors with a choice of accommodations from a wide range of modern day rooms offering amazing viewpoints of the forest wildlife along with the Storsjon mountains.

Working together with the Moose garden tourism company responsible for the adoption and care of two orphaned moose calves the lodge through their website link below allows viewers a live webcam featuring the moose living in their natural environment out in the woods.

The isaberg Mountain Resort located in Southern Sweden is a moose protected wilderness area of over 6 hectares designed and developed to facilitate the specific needs of the moose. The park additionally contains a stream and a pond for the moose to bathe themselves.

Online viewers are able to watch via a live webcam, the father moose Karl-Oskar, mother Amy-Linnea along with their two calves Isodor and Isa in a natural environment by visiting the link provided below.

Since 1944 the River Point Resort located four hours from St. Paul Minneapolis in the heart of the Superior Natural Forest adjoining Ely, Minnesota has traditionally been a vacation resort offering providing families visiting the resort with enchanting wilderness memories through a variety of activities including Boundary Water Canoe Area adventure trips as well as an exciting experience gained via their accommodations.

The Point Resort webcam posted in the link below allows viewers to watch a live video stream of a number of wildlife animals within the area including the moose.

Located in Anchorage, Alaska Moosecam.com today is recognized as the foremost municipal moose website in the region creating moose awareness not only for children but also for individuals of all ages showing that moose found in urban districts are known for roaming the streets.

Although the website does not provide an active live webcam link to moose in the environment through their news segment on the website in the link provided below show a recorded video of a six hundred pound moose saved after falling through the ice.