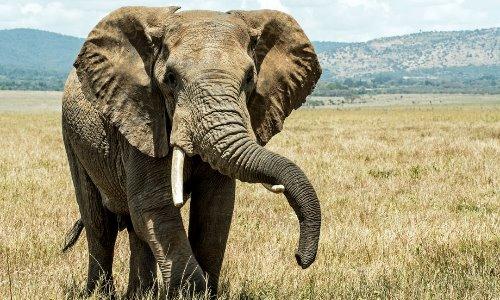 Although most people fear elephants for its massive size, what they don’t understand is that these mammals are very friendly and have the ability to recognize faces. Zoo keepers from around the world have noticed the strong bond these elephants make with them after coming to know each other.

Elephants are calm and peaceful creatures and like to explore its surrounding using its trunk. The video below shows elephants interacting with tourists at Bayete Zulu Game Reserve located in KwaZulu-Natal, South Africa. The best way to establish a good impression is by feeding them and tapping them on their trunks. This way they develop a liking towards you.

Located in KwaZulu-Natal, South Africa, Tembe National Elephant Park was established in 1973 and was developed by the joint efforts of Ezemvelo KZN Wildlife and Tembe Tribal Authority.

This 74,000 acre massive facility is situated right next to Ndumo Game Reserve. Extensive hunting and poaching resulted in a huge decline in the population of African Elephants. As a consequence, a Park was built in order to safe guard the elephants whose migratory route connects Maputaland and southern Mozambique.

The prolonged civil war in Mozambique at that time intensified the poaching activities which are why; the park was open to public only in 1991. As of now, the park shelters 250 elephants, some of which are the largest in the world. Additionally, the park is also famous for its largest tusker elephant (ISILO) in the whole Southern Hemisphere.

A live webcam is placed overlooking a watering hole in the National Park. Although Elephant activities are only prominent during the time span of 11 am to 3 pm, viewers can see a whole lot of other animals casually grazing around the watering hole. Being included in the endangered species list, these elephants are taken good care off and the perimeter of the park is constantly monitored.

Opened in 1916, the San Diego Zoo is home to over 3 700 animals belonging to over 650 species and subspecies. The 100 acre facility is located in Balboa Park, San Diego and is an accredited member of the Association of Zoos and Aquariums (AZA) as well as the American Alliance of Museums (AAM).

San Diego Zoo was amongst the first organization to develop the concept of open-air enclosures that provide the animals with a landscape resembling its natural habitat. Among the major exhibits situated in the zoo, the Elephant Odyssey is one of the best and shelters 13 elephants. The herd consists of 6 females and 7 male members and was started in 1994 when seven African elephants from Kruger.

National Park, South Africa arrived to San Diego Zoo via a facility in Swaziland. Eventually it grew in number to an extent that 5 elephants had to be moved to another zoo in March 2012. Webcams are placed in the elephant exhibit overlooking a watering hole, where these mammals spend most part of the day bathing and playing around. Matters regarding conservation of these endangered species have been taken into the hands of researchers and scientists who use these live cams to study their movements and behaviours.

Established in 1963, Twycross Zoo is a large facility home for about 900 animals from over 150 species. The campus is spread across a land mass of 80 acres and is located in Leicestershire, England.

Annually, the zoo gets a total number of 5 00 000 visitors who come to enjoy its wide range of animal collection, especially its primate section. This facility was recognized throughout the world to have the largest collection of monkeys and apes in the Western World.

Which is why, in 2006, the zoo launched itself as “Twycross Zoo- The World Primate Centre”. Major exhibits to be viewed in the zoo are that of the Great Apes, Elephants, Monkeys, Lions and many more. The zoo streams live videos of Elephants on the internet through webcams that are located in the elephant exhibit. This way, researchers and conservationists hope to spread the news of protection and conservation of these majestic creatures.

The elephant Sanctuary is located in Hohenwald, Tennessee and spread in an area of 2 700 acres. This large facility is home for 15 elephants belonging to 2 different species. Established in 1995, the Sanctuary is an accredited member of The Association of Sanctuaries (TAOS).

This large facility is divided into three different natural elephant habitat which is rendered so as to suit the environment to which Asians and African Elephants are used to. Currently, the sanctuary shelters two African and thirteen Asian Elephants.

Webcams located in several locations in the facility streams live videos to the sanctuary’s website so that viewers from around the globe enjoy the activities of these magnificent mammals.