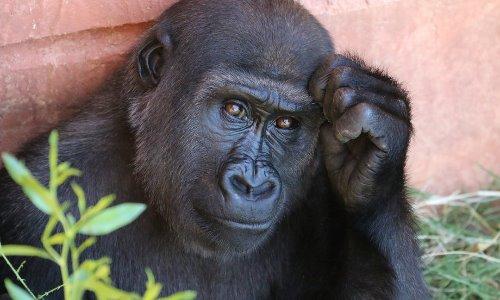 The chimpanzee often referred to as the chimp along with the orangutan, the gorillas and the human species are recognized as members of the Hominidae family and the closest living relatives to the human being. Chimpanzees are the only noted members of the sub tribe Panina, one of two Pan species thought to have separated over one million years ago.

Chimpanzees are known for living in large social groups known as communities consisting of multi-male and female families. Social stratification among the communities is prescribed by the position held by an individual and their influence projected on the others giving rise to what is commonly referred to as a leaner ranking.

The dominant or high-ranking male in a particular community is known as the alpha male and as such is generally responsible for maintaining social order within the group. Males who are found to be the alpha males in the communities are not necessarily regarded the strongest in the group but instead will be observed as having the greater capacity for manipulation and influence in the day to day activities of the genus.

Male chimpanzees when displaying acts of intimidation to maintain their authority and power over the group will puff their normally thin coat to increase their apparent size and charge towards other members in a powerful threatening manner. This action will usually result in the lower-ranked chimpanzees showing their submission by stretching their arms outwards while grunting. Females on the other hand in a show of their obedience to the alpha males by displaying their hindquarters.


Facts about the Chimpanzee

Located in Houston, Texas the Houston Zoo home to more than six thousand animals entertains over two million guests annually who visit the zoo for a breathtaking and educational experience. The zoo hosts a variety of animals and ecosystems as well as providing both public and private events for the enjoyment of the visitors.

By clicking on the link below you will be able to watch a live broadcast from the Chimpanzee Window Cam exhibit located at the zoo featuring their resident chimpanzees living in a naturally created habitat.

First opened to the public in 1913 the formally Scottish National Zoological Park, now the Edinburgh Zoo located in the capital of Scotland consisting of 82 acres since its foundation operates as a non-profit zoological park filled with a variety of wondrous animals promoting the conservation of endangered species and habitats.

One of the notable exhibits at the Edinburgh Zoo is a state-of-art facility known as the Budongo Trail named after the Budongo Forest located in Uganda. The facility home to a troop of robust chimpanzees teaches visitors about the lifestyle of the common chimpanzee, their social organization and the dangers they face in wildlife.

The Edinburgh Zoo houses a webcam offering viewers a live video stream via the zoo animal cam overlooking the Budongo Trail enclosure featuring the chimpanzees living and playing in their environment.

Located in Mohawk Park, one of the largest municipal parks within the United States of America in Tulsa, Oklahoma, the Tulsa Zoo owned by the city of Tulsa is a non-profit organization privately managed since 2010 by the Tulsa Zoo Management, Inc.

Recognized by Microsoft Game Studios as “America’s Favorite Zoo” the Tulsa Zoo hosts a large and wide variety of animal species and exhibits including their Chimpanzee Connection. Visitors to the Chimpanzee Connection can view chimpanzees in a sizable outdoor compound or inside a well-designed play-area equipped with a number of climbing accessories to keep the chimps mentally and physically active.

One of the most recent features of the Chimpanzee Connection exhibit is an online webcam providing the audience with an inside view into the living habitat of the seven chimps housed at the zoo.